Most of you will know that I have been a SAS programmer for over 30 years, but I also use other programming languages too. The first language I learnt was FORTRAN IV while I was an undergraduate at the University of York, with which I wrote the mark-up language that I used to format my thesis, and I also played with BASIC while I was at university. More recently I have developed functionality for my web sites in JavaScript, Java and Perl, and created Enterprise Guide Add-ins in VB.Net.

However, when I bought my first smartphone, a Palm Pre, in 2010, I discovered that I could write my own apps for its operating system webOS in JavaScript, and joining the webOS developer group was free. This gave me my first experience of selling apps for smartphones and tablets. Unfortunately webOS did not survive very long after HP bought Palm, so I branched out into writing apps in JavaScript for Chrome browsers, and for Android devices in Java. Now even the Chrome Web Store is no longer accepting new or updated apps, so I am left with just developing for Android devices.

My core Android apps are a series of what I call ebook apps focusing on SAS programming. They were originally developed in JavaScript for webOS, but have ported fairly well to Java, and each contains a collection of rich text “ebook” pages that display automatically scaled and formatted text and images to match your own device dimensions and orientation. You can also email out the code samples and ask new questions for future releases. The Google Play and Amazon Appstore functionality to update installed versions of these apps means that any new or updated pages are automatically sent to existing app users.

Every now and then I get “bright” ideas for games and educational apps. A number of my existing Chrome browser apps are about improving mental arithmetic, which I see as becoming a lost skill. There are 3 apps available in the Chrome Web Store called Arithmetic Brain Quest, Multiply Brain Quest and Fraction Brain Quest. Each game randomly generates 10 questions in the different categories, which must be answered correctly in the allotted to build a pile of blocks to reach the top of the screen, with a high score saved for each category.

There are also some Android puzzle solver and game apps which can be downloaded directly from my blog site, because the Google Play and Amazon Appstore functionality is not required when these apps are in their final versions. The puzzle solver apps are to help you develop or solve puzzles you may see in newspapers, magazines and on-line for Sudoku 6×6, Sujiko and Master Sujiko. 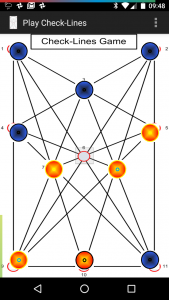 My most recent game apps are based on a board game created by Tri-Ang in 1970 called Check-Lines. The board had 11 holes joined by straight lines, and 2 players had 5 pieces each with the aim of placing them to form 2 straight lines of 3 pieces each, so 1 piece was part of both lines like an X, L, V or T. The game starts with an empty board and the players take turns to place their pieces in empty holes, and then, when all the pieces are on the board, moving one of their pieces along a straight line into the empty hole until 2 lines are created, or no move is possible. I have created 2 apps, one is a free “dumb” app Check-Lines Board which just enforces the rules, and the other app Play Check-Lines uses a simple AI to provide the 2nd player with hints, as shown in the screenshot.

Whatever you are doing at this time of the year I would like to wish everyone a very happy Christmas and a prosperous New Year!

Owner and Administrator of Holland Numerics: Blog and Forums. View all posts by Philip Holland