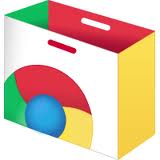 Regrettably I’ve withdrawn my apps from the Chrome Web Store after 9 years. For the last few years the Chrome Web Store has not been accepting new apps, only extensions, so I’ve not been able to add new apps, although updated apps have been accepted. However, recently my apps have been behaving differently, and only showing blank pages, so I’ve made the decision to withdraw my apps altogether.

There were 2 categories of apps in the Chrome Web Store:

Over the last few months I had been using Rebalance from Jetpack as the theme for my blog site, but more and more of its features seemed to conflict with my blog content:

I searched the catalogue of WordPress themes to find one that worked on the desktop and smaller screens and could only find the theme I am now using, Twenty Fifteen from WordPress. It also doesn’t require any restyling!

So why did I call it an old theme?

I used this theme when I first created this blog site in 2016. It has just taken me 5 years to realise how good it is!!

A number of software packages will be updated for stability and security.

Thank you for your understanding!

Remember to use your full personal name, not a business name (unless you’ve asked me first), and a full last name is expected and required to complete registration, not “X Y” where your user information is considered to be hiding your identity. If you supply a name like “X Y” then your profile will be set to Pending, which will be deleted automatically after 1 month if not corrected.

NEW: An activation email will be sent to your registered email address to confirm that it is valid. If you do not receive it within a few minutes, then please contact Philip Holland at phil@hollandnumerics.org.uk, as your email address may not have been accepted, but can be corrected.

It is also recommended that you do not use an email address as, or include your company name in, your user name, because user names cannot be changed, but your email address or company might change in the future!

You can register for Free blog membership here:

I’ve changed the site theme. Do you like it?

I’ve been using the LeftSide theme on this blog site for some time now, but it hasn’t been working as well on phones and tablets recently, so I’ve decided to update the theme to Rebalance. This new theme was designed to adapt more appropriately to desktop, phone and tablet screens, so it should give everyone a better view of my blog.

Do you like the new Rebalance theme compared with the previous LeftSide theme on my blog site? Please answer for every device you use: 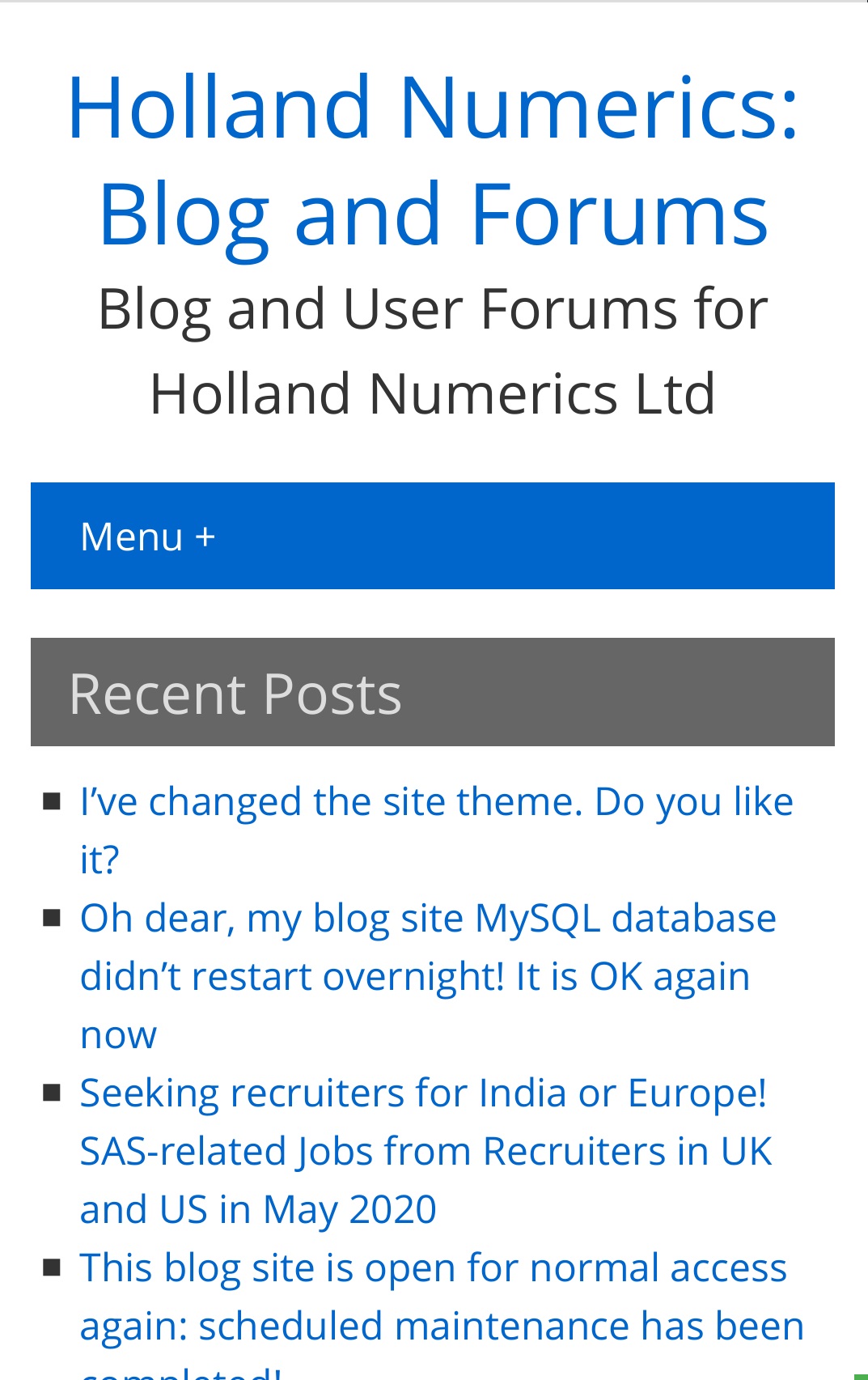 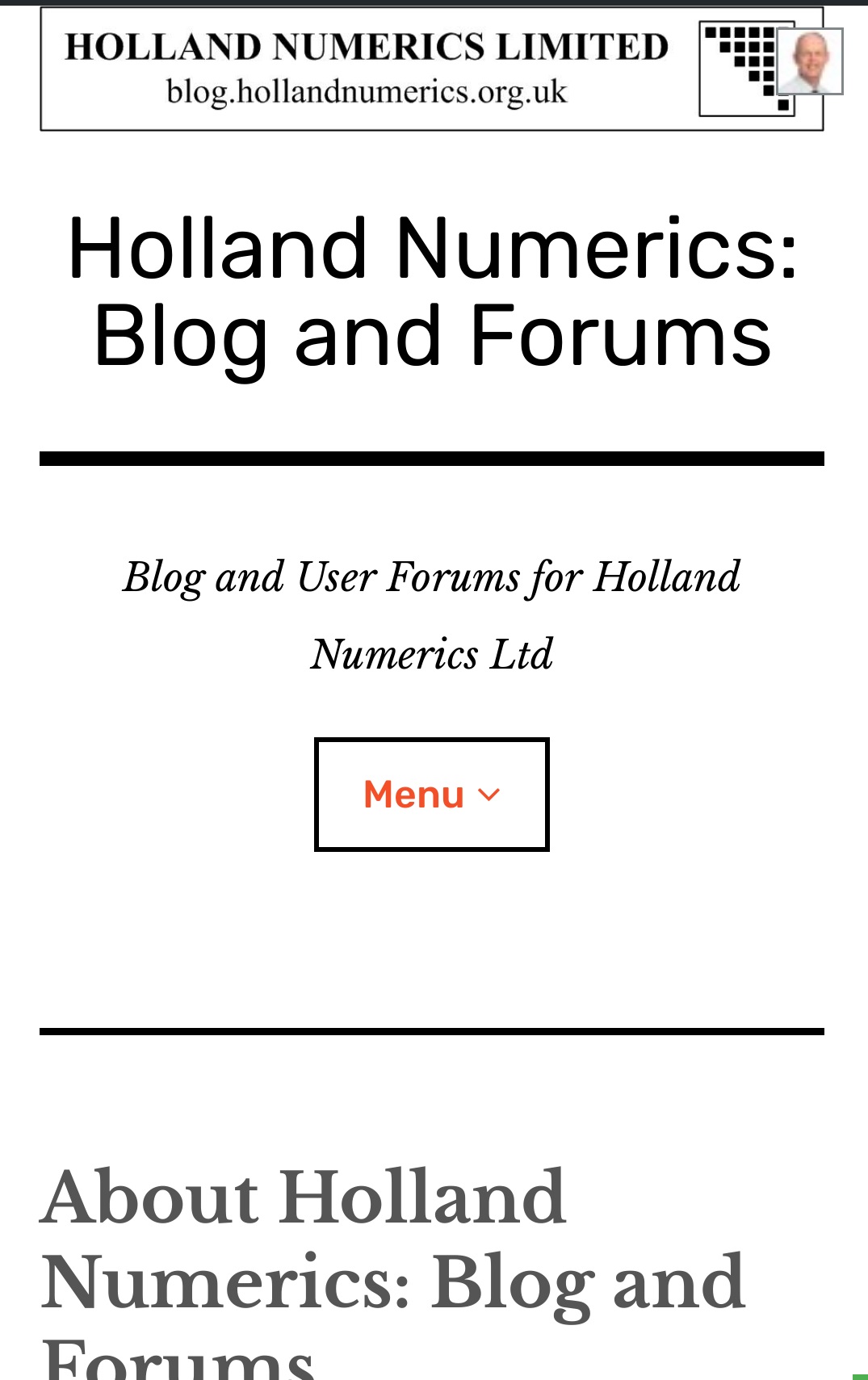 I’ve finally realised that my company’s email server on Microsoft Exchange 365 is too unreliable to use for emails from my SAS blog server, so I have configured the email client to send emails through Google Mail instead. This means that:

If you have existing email filters that accept emails from phil@hollandnumerics.com, please can you add hollandnumerics1992@gmail.com to your accepted email addresses.

In case you are wondering why I phrased the title of this post as I did, it is based on the announcement from Buckingham Palace when a monarch dies and the succession of a new monarch to the throne of the United Kingdom. It is a statement of continuity!

Various attempts to send out emails to members have made me realise that the reliability of the Microsoft Exchange 365 servers is better than the traffic restrictions of the Google Mail servers. As a consequence I’ve decided to revert back to sending emails from phil@hollandnumerics.com.

However, I may make use of the email server on my hollandnumerics.org.uk server in the future, so watch this space!

My SAS-related blog site is being encrypted! However, some links on the blog pages may still open pages that haven’t yet been encrypted until the process has been completed, so please be patient.

Please accept my apologies for any inconvenience caused, but the changes will make this site more secure in the future.

As part of the development of the VIEWS UK forum infrastructure, I’ve added a tag cloud for all of the forums used by logged-in blog members. This means that clicking a word or phrase in the tag cloud will generate a list of forum topics with that tag. I’ve also added a search form at the end of the page, in case you would like to search a specific forum.

Once you have logged into the blog site, this can either be accessed directly at Forum Tag Cloud page, or through the Menu via Forums, Features and Subscriptions > Forum Tag Cloud. If you have not logged in, then you will be directed to the Join Us page, and you won’t be able to see the item in the Menu! This is because the forums on the blog site can only be accessed by logged-in members.

Did you miss the links to the blog posts and forums? They are now visible again under the menu! I’m not sure when these links vanished, but I re-instated them this morning:

On 28 March 2017 I completed the migration of my blog and forums to a new server. You will not have to do anything different to access the new server, as it is all managed transparently by my router.

The new environment is protected by an uninterruptible power supply, and has an increase in its available disk space. I’m hoping that the chance of future interruptions has been dramatically reduced.

Alongside the blog are 2 forums where you can ask questions:

(1) The SAS Skills Discussion Forum is included when you register for the Free membership, and is where you can ask questions about SAS skills, but not SAS coding problems.

(2) The SAS Programming Forum, which has a very small subscription cost, is where you can ask SAS coding questions, including those from homework and interviews. This forum also includes a growing SAS course in the form of small topics. There are currently 3 main sections to the SAS course: Data Steps, PROC SQL and macros, but more are being developed.

Following my SAS blog server crash in September I have experienced occasional access interruptions from a few minutes to several hours since then. There have been various reasons for the down time, including WordPress plugin updates causing incompatibilities, server software updates, accidental disconnecting of the router, and my internet service provider temporarily interrupting their service to me.

To correct the last problem I decided to change my broadband connection from ADSL to a “Superfast” fibre, which meant changing my provider. This has now been completed, but the changeover process did more than change my internet service provider. While running the two broadband connections in parallel I discovered some issues in the setup of the network gateway, which had itself caused a number of interruptions. I can’t guarantee that there won’t be more short interruptions in the future, as I’m in the process of reorganising the cabling in my office, but I wanted to assure everyone that, if you have difficulty connecting, then wait a short while before trying again, as I will be back, and the blog could be quicker too! 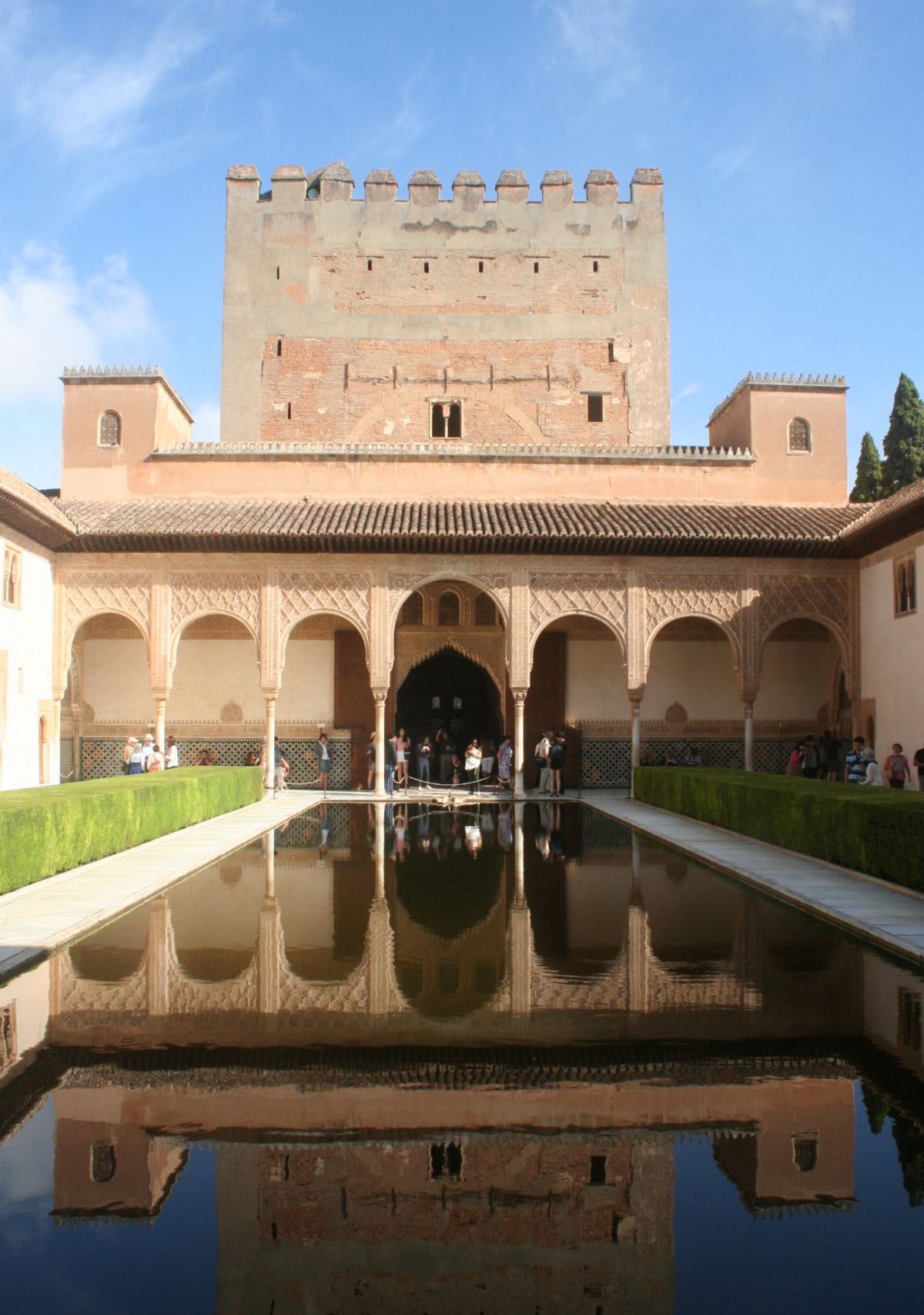 I suspect many of you will have a “bucket list”, a list of places you would really like to visit and activities you would like to do. I have bucket list myself, which included visiting the Alhambra in Granada in Southern Spain.  Last week my wife and I joined a tour of Andalusia, which included a visit to the Alhambra on the first day, where we enjoyed the splendour of the Moorish palace.

Little did I know at the time, but just after we had left for our tour my blog server switched itself off. I have still not determined the exact reason for the crash, but I think it could have been a local power cut that caused the shutdown. Anyway, I was 900 miles away with no remote access to the server, so I had to relax and enjoy the rest of the tour. On returning to the UK it was simply a matter of restarting the server, and normal service was restored in a few minutes.

I will conclude with some simple questions for you. I could have bought and installed an uninterruptible power supply to the server, which would have, hopefully, prevented the crash. However, I would not have been able to tell you about my bucket list!

My questions for you are: