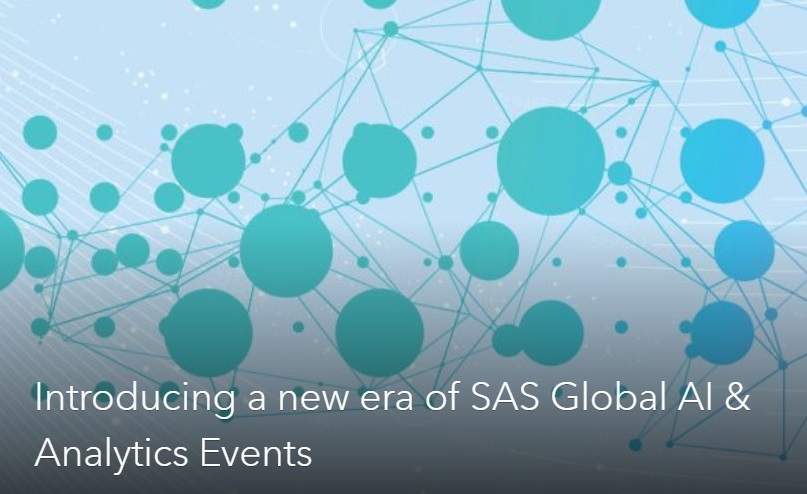 In a SAS Blog post Jenn Chase has announced that the flagship SAS Global Forum 2022 will be split into many AI and Analytics events, some virtual and some face-to-face:

I’ve also found a number of other links with information about these changes: This link allows you to download the paper and slides in a zip file, plus: 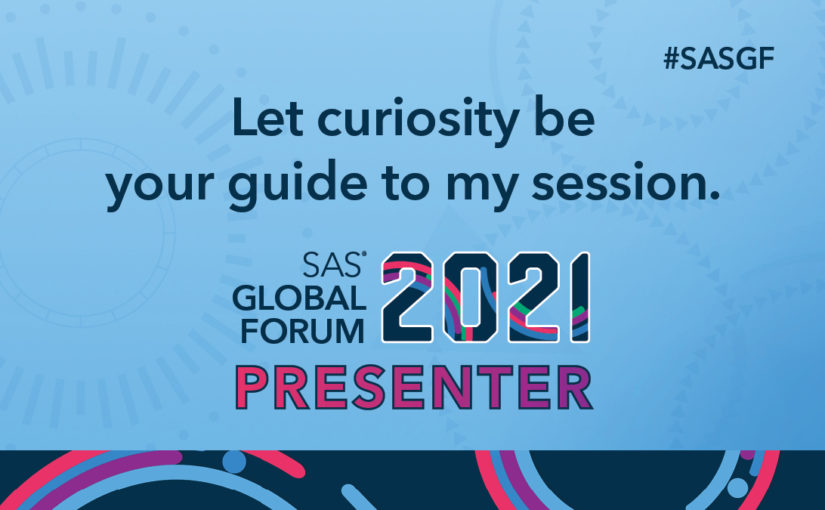 I’m presenting with Peedy at Virtual SAS Global Forum 2021 on 20May2021 at 1600hr (GMT+1), and I will be chatting in a Live Q&A from 1600-1630hr. My presentation is “How Many Shades of Guide: SAS Enterprise Guide to 8.3 and SAS Studio to 3.81 with SAS 9.4: Part 1 – SAS Enterprise Guide”, but it will only include Enterprise Guide due to time constraints. “Part 2 – SAS Studio” will be published at a later date, although the conference paper does include the history of both applications.

He does more in the conference presentation, so please come and cheer him on, and I’ll explain a little more about why he is there!

STOP PRESS: The #SASGF proceedings are now available, and my paper, slides and video link can now be found here.

I had a number of plans at the beginning of 2020, so how are they doing so far: 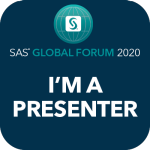 I’ve been using EG since 2001 when the version was 1.1.1, so I thought it would be a good idea to gather together all my EG and SAS Studio conference presentations with their assorted screenshots, and try to explain why each application works the way it does. In fact my EG installation has been updated since my paper was accepted, so I’ll actually be talking about EG 8.2 too!

I know some of you who are planning to attend SASGF 2020 may be thinking about starting their journeys home before my presentation starts. I would like to see everyone in the audience, but I do understand the pressures of transportation around DC, so, for you and anyone who can’t attend, I’ll be in a live-streaming session. Hopefully my session will also be recorded, so anyone who wants to learn more about EG and SAS Studio can watch me later.

For those of you who are attending SASGF please look out for me in the Quad, and elsewhere in the conference, and say Hi! I’ll try to post a link to my session here after the conference finishes (assuming it is recorded, of course!).

I have a number of plans for 2020, and hope to achieve them all:

A Merry Christmas and a Happy and Prosperous New Year to everyone, but especially to this blog’s members! 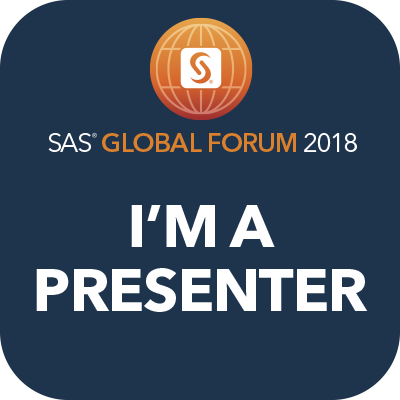 SAS Global Forum is being held in Denver in 2018 from Sunday 8th to Wednesday 11th April, and I’ve been invited to present “The Art of Defensive Programming: Coping with Unseen Data” there.

I’m also hoping to run another prize draw again for you to win a copy of my latest book “SAS Programming and Data Visualization Techniques: A Power User’s Guide“. Just drop in a business card or fill out a blank card at the ODS Graphics stand to get a chance to win a copy.

Note, however, that at SASGF18 you will only be able to read a copy of the book contents at the stand, as during SASGF17 someone took away my well-used sample copy. So, if you still want to browse the sample, then you’ll have to find me among the expected 5,000+ attendees! 🙁

Hope to see you there.

As usual I ran a prize draw this year at SAS Global Forum in Orlando for a copy of my latest book, which was won by Matthew Hoolsema from Carnegie Mellon University from 49 draw entries. 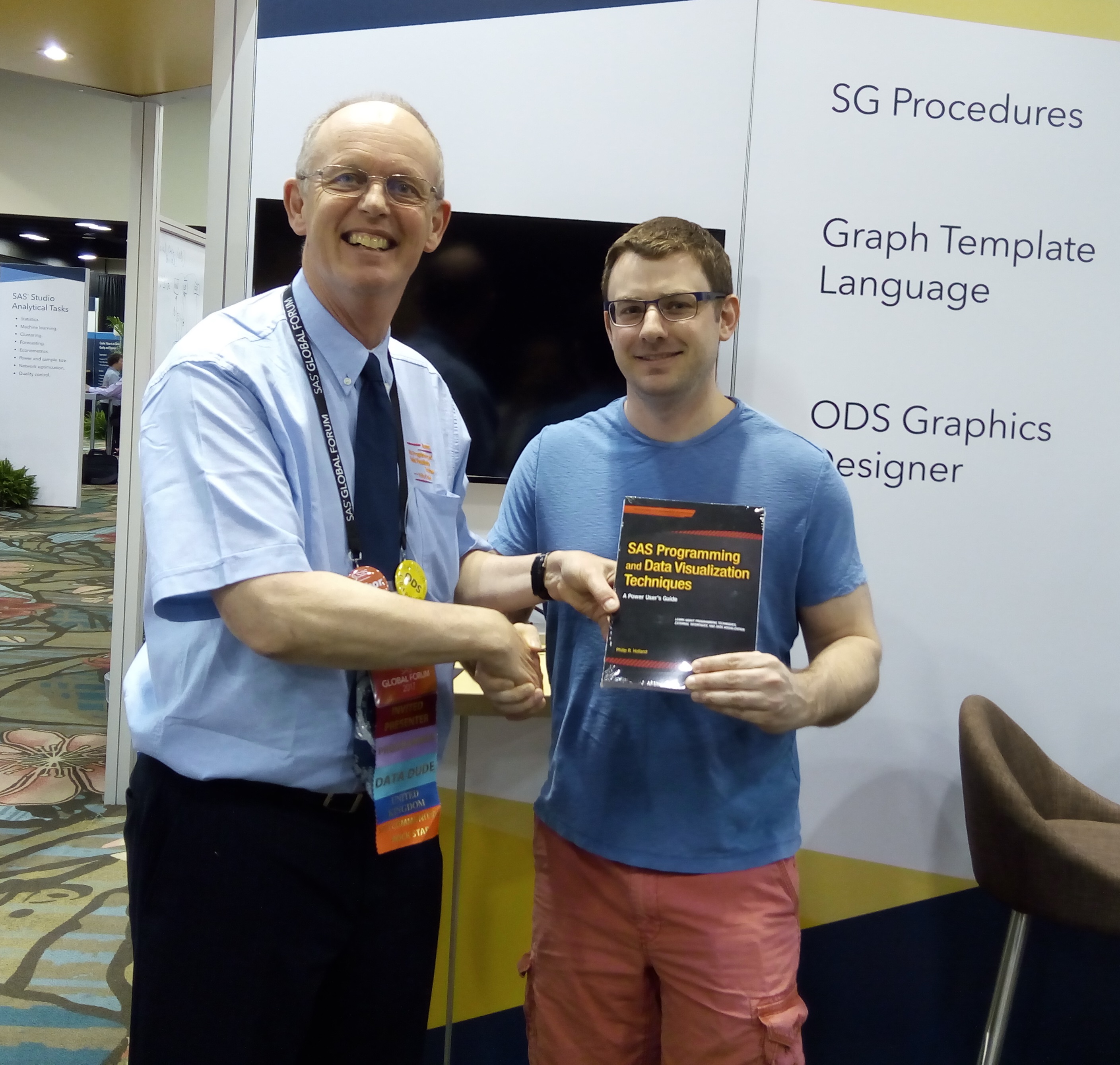 The sad part was that my well-thumbed sample copy, which allowed everyone to see what was in the book, was taken during the conference, so I will have to replace it with another brand new copy before my next free draw, instead of using that new copy as a prize. I must admit that I find it extremely annoying when a company can pay $100s to $1,000s for the conference registration, travel and accommodation, but nothing for a $40 book!

The conference’s Kick-Back party was held at Disney Hollywood Studios at the end of the 2nd full day of the conference after the public had left. I’d last visited this park in 1999, when it was called MGM Studios. Some of the “exciting” rides, which I have never enjoyed, were open, and my favourite show from 1999, “Indiana Jones Stunt Spectacular”, was still there, but disappointingly closed for the evening! Fortunately, unlike previous Kick-Back parties, the noise levels were low enough to permit normal conversations, so my voice was still OK the following morning for my presentation. You may remember that in March I said that I was presenting “Making Validation of Graphs Easier: The Benefits of ODS Graphics” at the conference on 5 April 2017. The video recording of my presentation can now be viewed on the SAS web site, along with several of the other presentations, and my paper, slides and sample code can be downloaded from this blog site.

Next year SAS Global Forum will be in Denver, Colorado. I’ve never been there before, so I’m looking for some suitable topics for new presentations. Any suggestions?

Are you attending SAS Global Forum in April this year? If you are then you have the opportunity to see me present “Making Graphs Easier to Validate – The Benefits of ODS Graphics” on Wednesday 5 April from 1100-1150hr. I’ll be in the Americas Seminar Room on Dolphin Level 5 at the Walt Disney World Swan and Dolphin Resort in Orlando, Florida. In this presentation I’ll be talking about how to make your graphs easier to validate by using ODS Graphics and a lot of common sense!

However, maybe you are not going to be in Orlando in April, but you and your colleagues would still like to see me present on this topic. What can you do about that? Well it should still be possible, because I’m currently developing a 1/2 day training session which I’m calling “Defensive SAS Programming”. This will include “Making Graphs Easier to Validate – The Benefits of ODS Graphics”, but also “Writing Reusable Macros” and another new topic “The Art of Defensive Programming: How to Cope with Unseen Data”.

You’ll see from the link above that I don’t have to be in the room with you to present, therefore I could present through your company’s video-conferencing system from my own office at home to your conference room wherever you are instead. The “Available” and “Coming Soon” training sessions can all be booked in advance, but the “Coming Soon” training sessions will be developed specifically for you, if you are the first to request them.

Going back to “Making Graphs Easier to Validate – The Benefits of ODS Graphics”, this presentation and paper will be available for download from the Product Shop shortly after it is presented for the first time, but may also be available from the SAS Global Forum site before the conference too!

I’m looking forward to SAS Global Forum, and hope to see you there, or elsewhere in the near future!