My wife and I flew from London to Boston, where we spent 2 nights visiting the historical sites in and around the city, as well as tasting some excellent local beers.

We then flew to Buffalo and crossed the border into Canada to visit Niagara Falls for 2 nights, walking behind the Horseshoe Falls and braving the mist. This spot had been high on my wife’s “bucket list” for many years. Admittedly the Hornblower catamarans used from the Canadian side do have transparent screens, so we didn’t get as wet as some of the other passengers! In contrast, the Maid of the Mists boats from the American side have no protection at all, but, as single-hull boats, can’t approach as close to the falls either.

We then flew from Buffalo to Philadelphia for the start of PharmaSUG, where I was a First Timer. I proudly wore my First Timer ribbon legitimately, as I’d never been to PharmaSUG before, along with my Presenter and Code Doctor ribbons. However, it was also a bit misleading, as I’ve presented previously at more than 30 international conferences in Europe and the USA, so several conference friends told me off for cheating.

My presentation wasn’t about ODS Graphics this time, but about SAS programming techniques to reduce data surprises. The room was about half full early on Tuesday morning, and, judging by the number of questions afterwards, well received (and I didn’t see anyone leave in the middle!). My room was run with friendship and precision by Frank Canale and Maggie Ying, who both made me very welcome, so I must give them a big thank you.

I had sat on the Code Doctors table in the “Code Clinic” at SAS Global Forum, but my 2 official sessions in Philadelphia, and several unofficial sessions too, were actually more enjoyable. Each session started very quietly, so I got to chat with my fellow Doctors, many of whom I’d met many times before. The last half hour of each session was filled with varied questions about concatenating strings in R, working around annoying “features” in old Microsoft applets, and answering questions about CDISC SDTM and ADaM specifications. Note the lack of “real” SAS questions, but still very entertaining, and I hope the answers proved useful!

PharmaSUG US 2019 had a record attendance of 910 this year, but I’d previously attended SAS Global Forum with 6,500 attendees, so it felt much smaller and more personable. Being relatively small also made it easier to meet up with people there. The conference lunches were excellent too, so a big thank you to MaryAnne DePesquo, although I was initially worried she might be cross with me for missing SAS Global Forum 2019 in Dallas, where she was Conference Chair, but she did forgive me!

I knew I would meet several conference friends I’d met before at SAS Global Forum and PhUSE, but I never expected so many friends would be there. In fact there were, apparently, rumours beforehand that I was coming to PharmaSUG, and some there didn’t believe them! Anyway, everyone was very welcoming, and I made lots of new conference friends at PharmaSUG too. 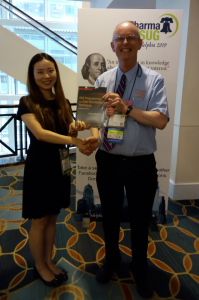 I have run free prize draws for copies of my latest book at most of the conferences I had attended since it was published in 2015, using the free copies Apress, the publisher, had sent me. My penultimate book prize draw at PharmaSUG was won by Qinxiao (Catherine) Shi, a Statistics student from the University of Connecticut (see photo). I wish I’d been able to take a photo of her reaction when she found out she had won. Let’s just say she was very pleased to win!

After 9 days in North America we had to travel home to the UK again, but not without one last adventure by rail, as I had booked a train from Philadelphia to Penn Station in New York. From there we had to catch 2 more trains, buying tickets before each leg, to get to JFK, our departure airport. While the potential issues were many, including an unexpected power outage at the station in Philadelphia that morning, I can report nothing untoward happened en route to JFK, and we even arrived there earlier than expected.

Now we have been back in the UK a few days, I’ve had time to reflect on our PharmaSUG journey, and all I can think of are 3 words: Welcoming, Enlightening and Worthwhile! Thank you everyone we’ve met in the USA and Canada. We’ll be back!

PS. For those interested in my beer tastings, I tasted 20 new beers during this journey: 4 in Boston, 4 in Niagara, 11 in Philadelphia and finally 1 in New York.